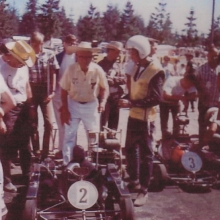 Looking back at my karting history – I started karting in 1963. At that time, there were dozens of tracks in Michigan, including tracks right around Detroit, like the one at the State Fairgrounds. We also could run there in the winter. I bought my first kart from a shop about 2 miles away from my home – called Ruttman Enterprises. It turned out that the Ruttman family lived a block away and that the Grandson (Troy Ruttman, Jr.) went to the same school I did. His dad won the Indy 500 in 1952 and continued to race until 1967. Troy, Jr. and I became best friends. I was fortunate enough to get trained by and drive for the Ruttmans with HUGE backing from my parents, by the way. This paved the way for me to meet and drive for the greatest names in karting. When I look back, I still have a hard time believing it myself. The names were Gil Horstman, John Hartman, Lou Borelli, Rich Burton, Dan Lumello, Don Shipps, Don Freber, Mike Burris, and Lynn Haddock.

In 1966 we hooked up with John Hartman and Lou Borelli to win the Jr. Stock class at Indy. Troy Jr. and I shared the ride and he won the Stock Heavy class. In 1967 I drove a Caretta again and won the Junior Stock class at Kent, Washington. We also ran at Quincy in 1966 and Riverside in ’67 where we qualified well and finished in the top 5. In 1968 we ran the Batavia and Green Valley, Texas Nationals, and finished 2nd in both moving up to the Senior classes. Then in 1969 it was Camden and IRP. Finished 2nd at Camden, but did not finish at Indy. At the 1970 Quincy Nationals, I won B Limited. In 1971 and 1972 I ran terrible with the 100 CC BM’s. DID NOT CUT IT. In 1973 I advanced to C-Open class and won at Ontario, California, beating 43 entries. In 1974, running with 75 C-Opens, I broke on the last lap. In 1976 to 1978, I had a job so quit racing. In 1979 got back into racing with a C-Open and won the Daytona Nationals. Then from 1980 to 1983, I ran an Indy Light car and struggled racing against drivers like Andretti, Unser, Gannassi etc. My best finish was 7th at Milwaukee. Ran some F200 B Pro races back east. I won at Cleveland and Road America and got 2nd in the 1984 Nationals. Dropped out again til 1991 when I ran the local Enduros in the Midwest where I won all the midstates series in the controlled classes. At the time, my main interest was high speed road racing.

I picked up a vintage Lancer around 2002 and started looking for a dual sidewinder, but had trouble finding one. Eventually converted a single Margay into a dual with 2 BM 130’s. I went to Quincy in 2004 for the Vintage Olympics and now I was hooked worse than ever! The guys I got to meet and talk to were awesome. Butch Stewart, Pete Berlt, Junior Neal, Mark Shepard, Terry Ives, etc. I can’t mention all of them and I don’t want to hurt anyone’s feelings. Some of these guys were my mentors. I watched them run duals when I was too young and they were like Gods to me. We now talk and get together on a regular basis. The comradery is tremendous as you don’t have all the pressure to win in Vintage Karting. Don’t get me wrong, some of us get a little carried away as it is hard to put out that flame. In the past, Mick Rupp and Pete Berlt had triple WestBends, so I decided that I needed to build one. I found a 66 Hornet SS that I restored to copy the one I had in 1967 at Riverside and I took it back there in 2008 to race. I have a 1963 Hellcat with a Mac 30 which was my first kart. I have collected 4 twins, a triple, 1 single and about 30 engines of all types. The karts are all complete and run terrific . Needless to say that I spend all my spare time and money on them! I enjoy working on them and helping others get involved in the sport.

In 2007, I called Mark Dismore and asked him if we could bring a bunch of C-Open Sidewinders to the Pro Race at his track in New Castle. We were invited and 20 karts showed up and put on quite a show. Then I got the bug to put on a Vintage Karting event at New Castle. I asked Gus Trader for his advice, as he is a veteran race promoter. I tracked down several old karters using the internet and sent postcards. I was fortunate enough to drag Richard Peck from Hornet Mfg. into it. I also got to meet and visit Mick Rupp at his home at Mansfield, Ohio and got him to come to the race at New Castle. I have now put on many races at New Castle, Camden and even one at Circleville.

Next year (2018) will be the 10th annual event at New Castle and the 7th annual event at Camden. The attendance has grown over the years especially after the Yamaha classes were added. Some of the greatest people involved in karting have attended the races at New Castle over the years. Mick Rupp, Duffy Livingstone, Faye Pierson, Don Freber and the list goes on and on. The Hall of Fame have many of the best listed on it. There is a complete list on this site. We have lost some of them due to age and illness and they will be greatly missed. I am trying to continue the great sport I love so much by working with the VKA and others to get younger drivers involved. The people involved in Vintage Karting are tremendous and we have a common bond that unites us. I hope to continue to give back to the sport that I grew up with and experience some more good times along the way.